How acupuncture helped save Boomer 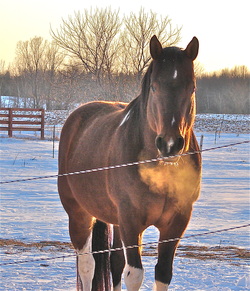 The world is an ever-changing place.  The daily advances we make in our thoughts and technology simply amaze me!  Not that long ago people believed the world was flat, we’d never walk on the moon and in home personal computers might show up by the year 2020.  It seems to me, with things changing so impressively all the time; it pays to keep an open mind.  It certainly paid off for a client of mine!

In the spring of 2007, a beautiful young paint horse stallion named Boomer started showing some unusual symptoms.  At first his owner, Becky Wickesberg, noticed that she thought his lips were just a tiny bit droopier than normal.  It was a very subtle change (one that I am not sure I would have noticed!), so she decided to watch it carefully.  Then a few days later it seemed like his nose was slightly tipped to the side.  The next day it his nose was definitely tipped to the side, so Becky called her veterinarian right away.

Dr. Paula Valeria came to examine the horse and discovered he had facial nerve paralysis.  When a horse has facial nerve paralysis the motor function to one side of their face is impaired.  The facial nerve starts at the “brain stem” or the base of the brain at the back of the head and it travels to the muscles of the face.  The facial nerve’s job is to tell the muscles what the brain wants them to do.  These muscles cause movement in the eyelids, ears, nostrils, cheeks, nose and lips.  When the nerve is damaged, the messages don’t get sent and the muscles subsequently don’t work correctly and often appear paralyzed.

There are no standard traditional facial nerve paralysis treatments.  If there is obvious trauma we attempt to treat that with anti-inflammatories and reduce any swelling that may put pressure on the nerve.  But often we must simply wait and see what happens.  Ideally, as the damaged nerve heals, the facial function will slowly return.  Unfortunately for Boomer, this “tincture of time” was not accompanied by any improvement.  In fact, his condition was still actively worsening!

As luck would have it, Dr. Paula suggested they find out whether or not acupuncture might be able to help him.  Acupuncture is an ancient treatment method, originally used in China, as part of a complete health care system known as Traditional Chinese Medicine.  During an acupuncture treatment needles are inserted into special spots on the body called acupoints, or acupuncture points, to cause a desired healing effect.  These needles work to balance an energy network in the body, or one’s qi (pronounced “chee”).  At the time, I had recently completed the Veterinary Acupuncture training at the Chi Institute in Florida.  I knew that many diseases were successfully treated with acupuncture and facial nerve paralysis was one of them.

Becky was only too happy to try the acupuncture treatments, as she was desperate to give her favorite riding horse some relief.  Facial nerve paralysis not only causes an odd appearance of the face, but it is also actually quite dangerous for the horse.  As in Boomer’s case, his left eyelid was unable to blink and he was not producing tears.  His left eye was completely unprotected from the environment.  Just imagine if your horse rolled in their favorite sandy spot or dove into a deep hay pile for a snack, but was unable to close his eye to protect it from the sand or hay.  For these cases, it is only a matter of time before the horse accidentally damages their eye.

Three weeks after the start of Boomer’s condition, we started acupuncture treatments.  Typically, we prefer not to sedate patients for acupuncture.   The sedation drugs can interfere with the chemical response in the body that happens during acupuncture and thus make the acupuncture less effective.  But Boomer thought sticking needles in his face might very well be the stupidest idea in the whole world, and thus he was sedated for every treatment.

When we started Boomer’s treatments the left side of his face was completely droopy.  He could not blink his left eye, his left ear hung limply to the side, his muzzle was dramatically twisted to the right and his lips hung loosely.  We were ecstatic after Boomer’s first treatment, because he could create a partial blink response in the left eye.  By his third treatment, he could blink normally and move his ear!  By the fourth treatment, Boomer looked nearly normal.  This is where we started to get picky!  Boomer’s upper lip was still a little tilted and we wanted him to look his best for the ladies, so we completed two more treatments to totally restore his muzzle function.  By the end of his treatment regime Boomer’s face looked completely normal.

​We will be stopping all small animal service - READ MORE

NBVS is not available after hours or for emergency care.
If you have an emergency please contact your primary care veterinarian or the emergency clinic of your choice.
Powered by