The history of animal chiropractic 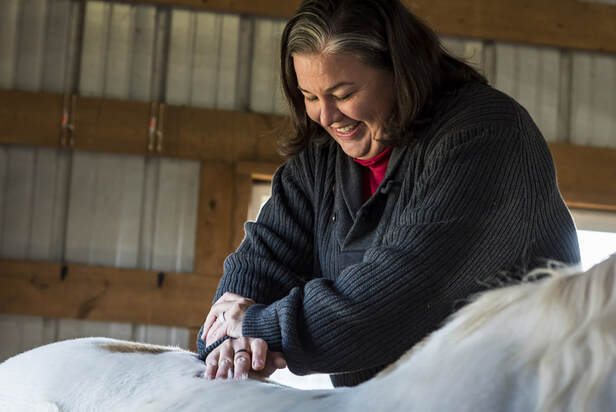 I have no idea what I did before the internet! I can find an address, research a disease, read the news, buy a gift and find a Paula Deen recipe all in a matter of moments.  The concept of the internet is so complex it just never ceases to amaze me how a person in Japan can write a message to me on their computer and have it end up in mine.  First they have to write the message, then hit a button, which beams it to a magical land called cyberspace, where my computer can snatch it up and pull it into my inbox.  The more technologically advanced people out there are laughing right now, because they know my secret… I am a pretty simple person.  Between the “hitting a button” and the “beaming it to cyberspace” about three hundred thousand individual actions occurred.  But for me it boils down to just those two.  We, humans, have a good way of making things complicated as our knowledge develops.  Even simple things can be made very complicated!  In my opinion, there isn’t anything wrong with keeping things simple and many of my clients agree!

Veterinarians have long focused their skills on treatment options for lame horses or horses that move oddly.  With all of the advances in technology, there are more treatment options for lame horses today than ever before.  From shockwave therapy to stem cell injections, the list of options is endless.  Today I’d like to talk about an uncomplicated treatment, Veterinary Spinal Manipulative Therapy (VSMT) which is commonly known as Animal Chiropractic Care.

Traditionally, when a horse has a performance problem we perform a lameness exam.  The performance problem might be a change in movement, trouble taking or maintaining the proper lead, cranky behavior, not liking the saddle or saddling process or even an inability to perform at all.  During a lameness exam we are searching for an identifiable problem with some part of the body, often the leg, which is causing the horse to move poorly.  Sometimes that identifiable problem doesn’t exist; sometimes no matter what we do traditionally we can’t eliminate the problems we see in the horse.

This is where a lot of clients turn to Veterinary Spinal Manipulative Therapy (VSMT).   In simplest terms, VSMT is a process of finding joints that are not moving in their optimal range of motion and then helping them to move.  People who have heard of chiropractic before often reference a bone being “out of place” or “out” prior to an adjustment.  That language cropped up a long time ago, when chiropractors tried to explain what they were doing in simple terms.  This brings up the difference between a medical or veterinary subluxation and a chiropractic subluxation.  A medical or veterinary subluxation is when one’s bone is displaced, like a dislocated shoulder.  A chiropractic subluxation is a joint that is not moving as much as it should in some direction it normally would, a “stuck” joint.  If one’s bones are truly “out of place” chiropractic care will not fix them.  If the vertebrae of the spine are “out of place” one needs a surgeon, not a chiropractor.

During an appointment, we perform motion palpation on a patient to discover which joints don’t move as much as they should and in which direction they are not moving.  These “stuck” joints are called vertebral subluxation complexes.  Once found, the stuck joint is corrected through an adjustment.  An adjustment is a high velocity, low amplitude thrust on a specific spot of a specific bone in a specific direction.   This translates into a quick, shallow push on a joint, but specificity is the key!  The specificity of an adjustment is what Animal Chiropractic students spend hundreds of hours learning.  The specificity is what makes VSMT such a safe and successful treatment.

We can make anything pretty complicated if we want to; the same is true of VSMT.  While the concept of a stuck joint and an adjustment aren’t too convoluted, the amazing changes behind the scenes are!  When joints are stuck they create inflammation that can affect the ability of surrounding nerves to translate signals.  Our nerves, brain and spinal cord (the central nervous system) controls everything in our body from our eye color to whether or not we can breathe properly.  Improving the ability of any nerve to translate signals can improve anything that nerve was involved with.  This is the part that gets a little confusing for some people.  The ability of an adjustment to positively affect the central nervous system is how chiropractic care can help patients with symptoms other than stiff necks and sore backs.

The very first human chiropractic patient was a man named Harvey Lillard.  Harvey, who had been deaf for nearly 17 years, was a janitor in a building where Dr. D.D. Palmer had his office.  Harvey became deaf when he lifted a heavy package from a stooped position, he felt something “give way” in his back and soon lost his hearing.  When Dr. Palmer learned how Harvey became deaf, he wondered whether or not fixing the lump that remained in Harvey’s back would restore his hearing.  Dr. Palmer convinced Harvey to let him adjust him in 1895, and his hearing returned shortly thereafter!

Over the years through thousands of VSMT patients I am continually impressed with the effectiveness of VSMT.  So much so, that it is impossible to describe a single case that illustrates my point, rather I’d like to introduce you to some of my patients.  There’s Cody, a beautiful paint gelding, who had a single line of hair standing up over his rump for years.  After being adjusted not only did Cody move better, but his hair lay down and hasn’t stood up since.  There’s Tabask, an elegant gray Arabian gelding, who occasionally gets stiff going one direction and stops bending well.  After being adjusted, he performs his dressage maneuvers effortlessly.  There’s Meridian, a majestic bay mare, who sometimes locks her stifle.  After her adjustments, she moves well with no catching for quite a while!  There’s Ralph, a wise beyond his 26 years Arabian gelding, who had rotated his hocks outward with every step since he was a yearling.  After his adjustments he walks straight with no rotation!   There’s Sarah, an athletic barrel racer, who absolutely panicked whenever someone approached her head.  After her adjustments (it took a long, long time and a lot of patience!) she has relaxed about her head handling and is performing better than ever!

Advances in technology and knowledge are important!  With any luck, such advances are going to find a cure for cancer, make “navicular disease” a thing of the past and prevent white horses from staining themselves with manure & mud at every turn!  In my world, keeping things simple is just as important.  In veterinary practice, I get to do some really amazing things.  But when I make an unhappy horse happy or a poorly moving horse fluid with nothing but my hands and a little love it is absolutely the coolest thing I do!

​We will be stopping all small animal service - READ MORE

NBVS is not available after hours or for emergency care.
If you have an emergency please contact your primary care veterinarian or the emergency clinic of your choice.
Powered by